7,000 BC
• The West Asia and Caspian Sea areas contain evidence that goats and sheep were sheared for wool and the material was woven. Nomad tribes weaved together rugs to warm earthen floors.

4,000 BC
• Weaved craft is used for Egyptian and Mesopotamian burials, as found in tombs.

2,000 BC
• Other evidence collected by historians indicates the weaving of pile rugs was present in the Middle East and central, northwest, and eastern parts of Asia.
• Carpet-weaving is a part of Persian art and culture in Bronze Age. 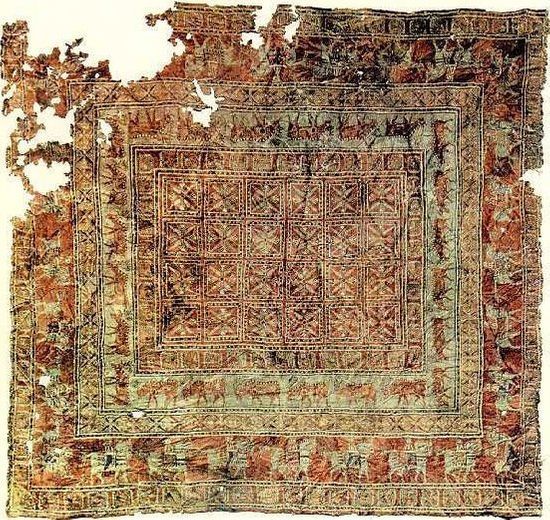 • The Pazyryk Carpet, the oldest known hand-knotted carpet, is thought to have been made at this time. A Russian anthropologist and archaeologist, Sergei Rudenko, excavated the 300 knots per inch, richly colored carpet in 1949. It was found in a frozen Scythian tomb in Siberia while Rudenko explored the Kurgans in the Altai Mountains. This is the oldest Persian rug known, it is on display in the St. Petersburg Museum.

• The Spring Carpet of Chosroes (or Khosrows) that belonged to the King of Persia is made at this time. It is also the second oldest known rug made of wool, silk, gold, silver, and precious stones that weigh up to a few tons. Chosroes is 400 ft x 100 ft in size and depicts beautiful scenes of springtime. When the Arabs conquered Persia, this rug was ripped into many pieces in order to obtain the precious jewels that were woven into the rug.

224-651 AD
• In the text of the Chinese Sui Annals (AD 590-617), Neo-Persian (Sassanid) Empire, the last Iranian empire that ruled Middle Persia before the rise of Islam carries woven products.

13th -14th Century
• The Crusades use and distribute pile rugs in Europe.
• Eleanor of Castile marries Edward I of England in 1254 and brings many fine rugs from her homeland in Spain.
• King Louis IX (1214-1270) spreads rug popularity through France.
• The travel of Marco Polo, an Italian merchant, in the 1260s spreads the influence from the embassies of Venice to China.

15th Century
• Oriental rugs are a symbol of wealth in Europe as noblemen and women have their portraits painted with their Ottoman or Turkish rugs in the background.
• A rug is drawn in San Marco Altarpiece (1438-1443), a painting of the Virgin and Child by Fra Angelico, an Italian painter during the Renaissance.

16th Century
• Rug making in China begins during Qing Dynasty and in the Middle East during the reign of the Safavid Dynasty.
• The Ardabil Carpet, encrusted with jewels, is a pair of famous Iranian carpets completed in 1539-40. The foundation of the carpets is made of silk and wool at a density of 300-350 knots per square inch. The size of both carpets is 34.5 ft x 17.5 ft. They were first placed in a mosque in the city of Ardabil and then were sold in England in 1890s. They now reside in the Victoria and Albert Museum.
• The art of rug and carpet making is introduced to India by the great Mughal Emperor Akbar as he brings in Persian weavers from Kashan, Isfahan and Kerman. The Indian carpets are famous because of their detailed designs and high density of knotting. 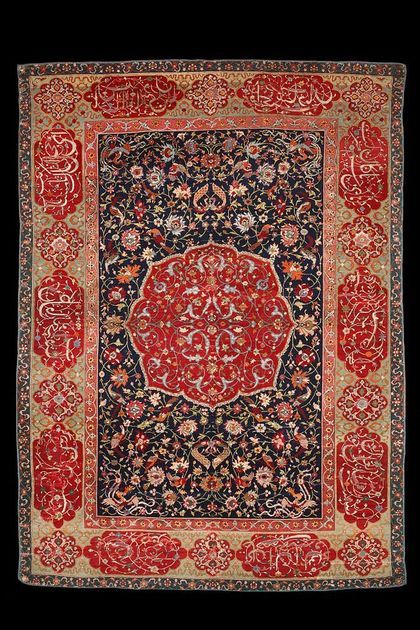 17th Century
• In 1608, Henry IV (Henry the Great) commissions DuPont and his apprentice Simon Lourdes to produce carpets from a workshop in the Louvre and later in Savonnerie.
• Most residences in England, including palaces and large houses belonging to landowners, made use of rushes and hay strewn about to cover their floors until this time. Over the years, more and more British people of wealth start using pile rugs in their homes.

18th Century
• Native Americans, the Navajos in particular, learn the craft of rug making from the Pueblo tribe. This theory is supported by tribal elders and remnants of Navajo rugs in the 1700s that are a close parallel to rugs made by the Pueblos.
• The Persian rug-weaving industry becomes nearly obsolete in 1722 when the Afghans invade Persia.

19th-20th Century
• British rules the Indian subcontinent in 1858. Gandhi promotes the idea of Khaddar to boycott English clothes. The term Khaddar (Khādī) represents handspun and woven clothes made from a spinning wheel called charkha, and was commonly used in India, Bangladesh, and Pakistan.

• Some of the European countries, especially Belgium, develop a major machine-made rug industry. Rug makers start using synthetic dyes for coloring wool. Workers are paid by the hour instead of by the rug. The worldwide production makes rugs a commonly owned household item.