CONSTRUCTION OF RUGS WITH A LOOM

CONSTRUCTION OF RUGS WITH A LOOM

The major components of the loom are the heddle frame, heald, harnesses (shafts in two or four), shuttle, reed and takeup roll. In the loom, yarn processing includes shedding, picking, and battening.

Looms are generally known as either vertical or horizontal. Horizontal looms are easier to dismantle, thus popular in the weaving of tribal rugs. Vertical looms are used in commercial, city and village weaving. There are many different types of looms with several of shapes and mechanics, but the basic purpose is to hold the threads under tension to facilitate the interweaving of threads. 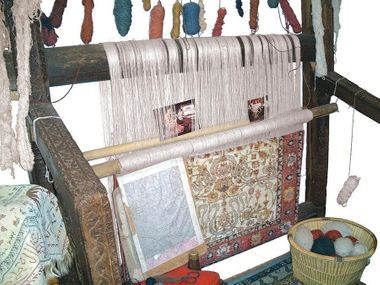 1. Shedding is the raising of part of the warp yarn to form a shed, which is the vertical gap between the raised and the unraised wrap yarns. The heddle frame is a rectangular frame of the loom to which a series wires with harnesses attached.

2. Picking is when a single thread of the weft crosses the warp over and over to fill up the gap. In North America, the process of a “pick” is referred to as “filling yarn.” A weft is threaded through the warp using a "shuttle." During the Industrial Revolution, John Kay’s "flying shuttle," also known as the “wheeled shuttle,” accelerated the production of cloth. Not only did it allow a single weaver to weave wider fabrics, but it can also be mechanized in automatic machine looms. It became possible to make cotton yarn of sufficient strength to be used as the warp in mechanized weaving. Later, artificial or man-made fibers such as nylon or rayon were employed. The power loom patented by Edmund Cartwright in 1785 allowed sixty picks per minute.

3. Battening is the process of pressing down the weft after the shuttle move across the loom. The portion of the fabric that has already been formed but not yet rolled up on the takeup roll is called the fell.

Once a rug is finished, it is then taken off the loom. The sides may be overcast and the ends secured.
The finishing process consists of:
1. Dusting
2. Some rugs are singed on the back with a propane torch to remove fuzzing
3. Chemical wash, rinse and dry
4. Some rugs are blocked
5. Shearing of the front of the rug
6. Quality control check
7. Ready to ship