Knot count is typically counted in knots per square inch (kpsi) or knots per square meter (kpsm). Think of knot count and rug as pixels and TV in the modern days. Loosely woven rugs can have as few as 16 kpsi and finely woven rugs over 1,000 kpsi. The higher knot count, the more clear and detail the rugs can be. Knot count is one of the factors in determining the value of a rug, next to age, material and origin. In addition, it also deters if the warps are depressed or non-depressed. To explain, a knot has a certain amount of node on each vertical line that are visible on the backside of the rug; if only one node shows, it’s depressed, and non-depressed if two.

It is common with some rug types, such as BOKHARAS, Tekke-faced rugs. Tekke was a tribe from the area of Bokhara in Central Asia. The design is dominated by rows of guls and surrounding geometric patterns. A gul, a motif on oriental rugs, is a large octagonal design derived from the shape of a rose.

Also known as the Ghiordes knot, the symmetrical design is used in Turkey, the Caucasus, East Turkmenistan, and some Kurdish areas of Iran. To make a Turkish knot, the yarn is passed between two adjacent warps, brought back under one, wrapped around both forming a collar, then pulled through the center so that both ends emerge between the warps. 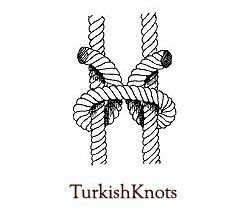 This type of knot is also known as the Senneh knot as it was named after a Persian city. It is used for finer rugs and is very common in Iran, India, Turkey, Pakistan, China and Egypt. The yarn is wrapped around only one warp, and then passed behind the adjacent warp so that it divides the two ends of the yarn. The Persian knot may open on the left or the right, and rugs woven with this knot are generally more accurate and symmetrical.

The Spanish knot looped around single alternate warps so the ends are brought out on either side while the Jufti knot is tied around four warps instead. It was used mainly in Spain, differs from the Turkish and Persian knot in looping around only one warp yarn. After the 18th century it became extremely rare.

The endless knot - or eternal knot - is a symbolic knot of the Eight Auspicious Symbols— sacred signs endemic to Buddhism, Jainism, and Hinduism. It is an important cultural marker in places significantly influenced by Tibetan Buddhism in Tibet, Mongolia, Tuva, Kalmykia, and Buryatia. It is also sometimes found in Chinese weaving. This knot has a different formation with a temporary rod that establishes the length of pile in front of the warp. Then, a continuous yarn is looped around two warps and then once around the rod. After the yarn went through with the row, the loops are cut to form the knot.