In weaving, the warp is the set of lengthwise yarns that are held in tension on a frame or loom. A warp is the lengthwise or longitudinal thread in a roll, while weft is the transverse thread. The weft, or sometimes woof, is the term for the thread made of spun fiber that is drawn through the warp yarns to create cloth.

Because the weft does not have to be stretched on a loom in the way that the warp is, it can generally be less strong. On the other hand, warp yarn must be strong to endure the tension.

Bold, geometric patterns with a large medallion in the middle of the carpet are common characteristics of Heriz rugs, as are the vivid colors of rust reds and deep blues. Floral patterns are also found on Heriz antique rugs. Rugs with these patterns are known for their red, blue, yellow, ivory, and green colors. 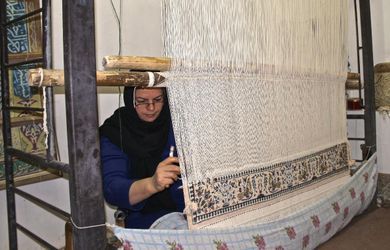 A cartoon, a design drawn on graph paper with each colored square representing a knot, determines the design of each hand-knotted rug. Designs are also determined by a weaver who chants the design pattern or from the weaver's memory. The cartoon is fixed to the loom just above the eye level of the weaver.

Oriental rugs are hand-knotted on a foundation of warps and wefts most often made of wool, cotton or silk. The construction of an oriental rug begins with warp yarns being wrapped around the upper and lower ends of the loom, running the length of the rug and forming the fringe on the top and bottom of the rug. With only a few exceptions, knots are tied around two warps and then trimmed with a small knife. Depressing a warp, that is offsetting it on two different levels, allows for more knots per square inch, creating curvilinear lines and more complex designs. The last warps on each side of the rug are called terminal warps.

The wefts are horizontal yarns woven over and under the warp yarn. This combination is called the foundation of the hand-knotted rug. After one row of knots and wefts has been inserted, the wefts are pounded using a heavy comb; this process adds to the density and rigidity of the rug. The number of wefts between each row of knots, the materials used in the construction and the colors of the wefts all help determine a rug’s origin.

Ends of the rugs must be finished to keep the rug from unraveling after the warps are cut before being taken off the loom. Different rug types are finished in different ways, and this is another component of identification. The edge formed by finishing a side is called a selvage. The end finishes of a rug are not necessarily the same on each end. Furthermore, the side finishes can also vary and are another component of identification. Both finishes are crucial to maintain the beauty and durability of the rug. 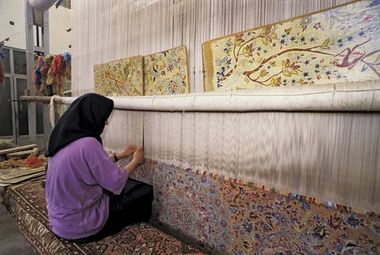 The warps are cut when a rug is finished and needs to be taken off a loom. Fringes are the remaining threads from each weft; the fringes can be left cut or uncut depending on the weaver. Some fringes are secured with a cotton kilim or a woven band chain stitched at the last row of knots. Sometimes the weavers make their fringes into braids and saddlebags, and even weave their fringes into more knots with or without a band or kilim.

The sides can be either single or multi-colored finish, the side of the carpet, also known as the edge, is called a selvage. If the weaver decides to not add a tassel or braids, the terminal wraps are returned and loop around the edge weft to make a new row. The edge weft, known as the structural weft, is thicker and more durable than any other wefts, and will increase in size depending on the amount of times that a warp is looped around the weft before turning back to form a new row. Sometimes a terminal warp can be looped around multiple edge wefts to increase stability.

The two basic knots in oriental rugs are the symmetrical Turkish knot and the asymmetrical Persian knot. Both knots are tied around two warps. The only way of identifying the knots is by grinning the rugs between a row of knots across the weft. The asymmetrical knot can be tied with the loop on either the right or the left with the tufts coming from the opposite side. Other knots such as Spanish knots, Jufti and Tibetan knots are also frequently used in weaving.